I’m not trying to claim any snob value here but I discovered Terry Pratchett’s Discworld almost right at the beginning. Back in 1985 I read an interview with Terry Pratchett, promoting the paperback release of the first Discworld novel The Colour of Magic, thought it sounded funny and bought it soon after. Possibly as a birthday present for my sister Gail now I come to think about it. Turned out we both enjoyed this send up of fantasy novels and it set us, and eventually my whole family, on an enjoyable journey with Terry’s funny, ingenious books for many years.

Wyrd Sisters is the first proper Discworld Witches book, introducing us to the eccentric coven of the formidable, good but scary Granny Weatherwax, the cheerful, earthy, experienced Nanny Ogg, and the naïve, enthusiastic Magrat. As well as Witches, it has a ghost, a demon, lots of dim-witted guards, and a troupe of theatricals who stage a farcical play within the play.

It is in part a parody of Shakespeare, the Scottish Play in particular, but it is also a comedy about power, be it brute force, common sense or the subtler magic of storytelling. In fact I’m pretty sure it was Gail who bought me the script books of Wyrd Sisters and Guards! Guards! for my own birthday several years later. I had no idea they existed until then. By then I had become involved with amateur dramatics, and I loved Stephen Briggs’ adaptations and the idea of realising them on stage. So in time I persuaded my then current group of Mawdesley Amateur Dramatics to stage Wyrd Sisters. The photo at the top of the page is from that production.

Like many groups, a majority of MADS were women, so it was an advantage to have a play with four really good female roles, not to mention a fair amount of characters who could be played by either gender. That 2007 production was my first experience of directing theatre. It helped that we were already a group of friends, so that made it less intimidating that it could have been. We played it on a smallish village hall stage, with much less in the way of facilities at the time than Bolton Little Theatre has. For example the sound system consisted of my laptop computer and a guitar amp at the rear of the hall. I should add that the current hall has had something of an upgrade since. However the show was a success, and I think the local audience enjoyed the fact that we were trying something a bit different from the traditional amateur dramatic fare.

Now ten years later I am about to direct a new production in a fully equipped theatre with a specially designed set and a cast that is an interesting mix of experienced Bolton regulars and newer faces, some for whom this will be one of their first plays. I have Glenn Robinson, Francis Clemmitt, Jeff Lunt and Joylon Coombs providing invaluable advice and help. I have been doing my homework and pouring over the script, plotting out movements, assembling the music and sound effects. As I write this, the first rehearsal looms this Sunday afternoon and I’m hoping I’ll remember how to do this. It’s not just the Witches who are embarking on an adventure. 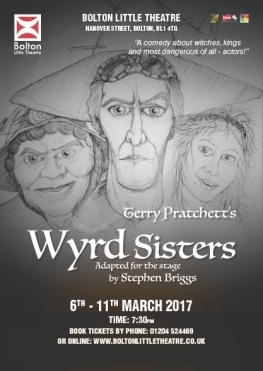 For more information and to book tickets, please visit our theatre website