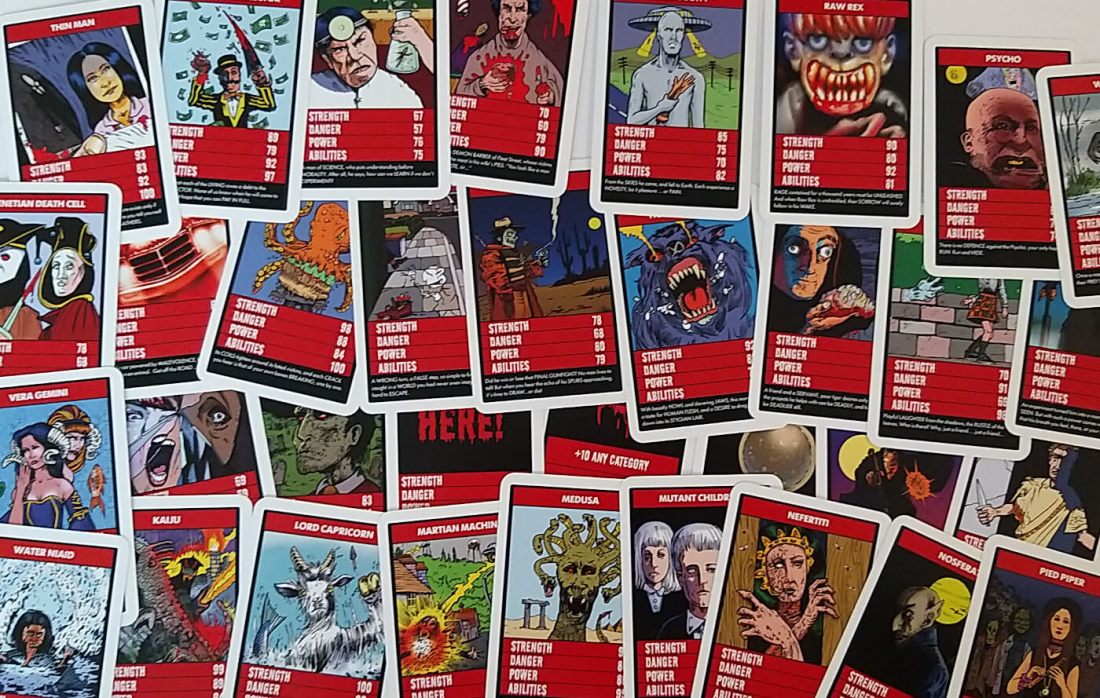 Grisly, lurid artwork. An array of horror fiends, both classic and original. Yes it is the return of Rik Hoskin, Tim Brown and Chatri Ahpornsiri’s labour of love Terror Trumps a card game which is also a homage to the classic Seventies Top Trumps Horror packs. I wrote about this project a few months ago. Now I’m the proud possessor (ho ho) of the enhanced version 2.0. Not only do many of the cards feature fresh characters and new art, but each carries a witty description by Rik too. Plus they’ve introduced more power-up cards too.

If you would learn more, take a look at their Kickstarter page http://kck.st/3bLx6zm

I really hope this imaginative project gets the support it deserves. 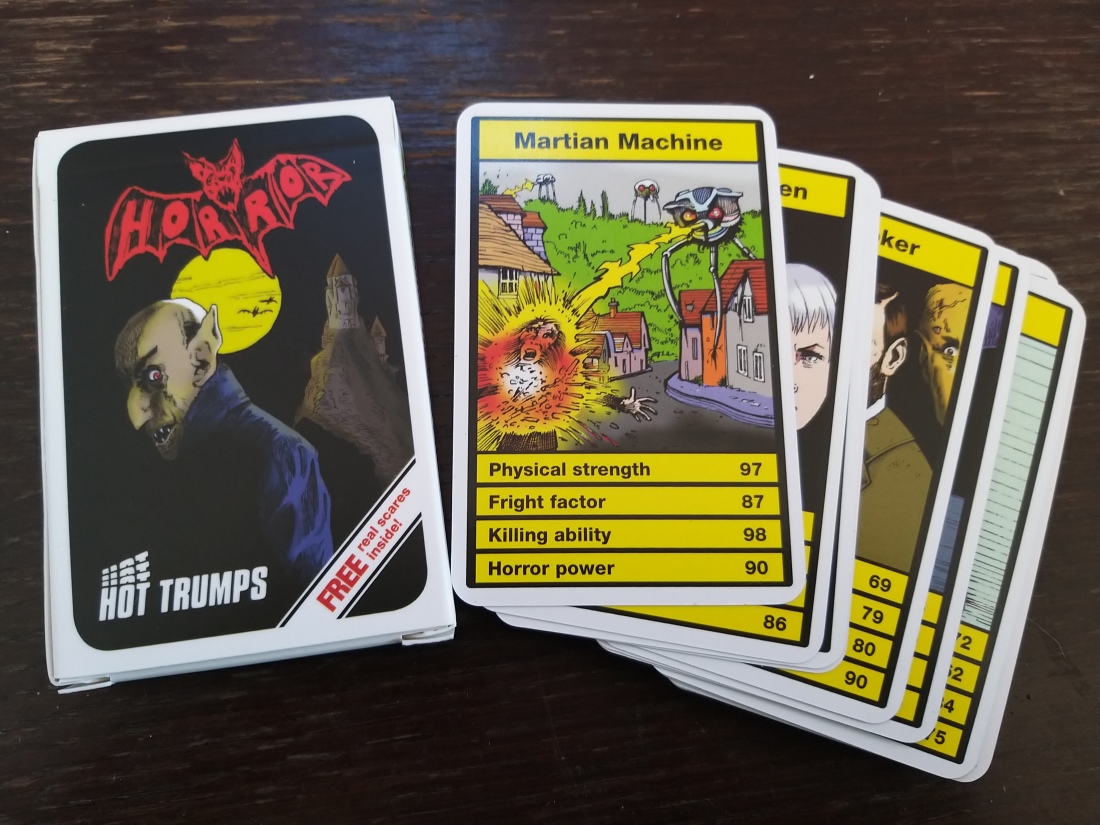 Horror and childhood are closely linked. Not just because we are having the formative experiences that future storytellers will be tapping into for the rest of our lives, but because children are paradoxically one of the major markets for terror filled merchandise. Halloween is around the corner and the supermarkets are full of gaping mouthed zombies, scowling skeletons and howling ghosts, all aimed at the family market. Plenty of toy franchises have their share of monsters. Harry Potter is infused with fairytale gothic. Nineties children made Goosebumps a phenomena. Eighties kids could enjoy Freddy Kruger replica gloves and dolls. But I’m a child of the Seventies and let me tell you we had some messed up merchandise aimed at us, material which somehow seemed a lot closer to the horror aimed at the supposed adult end of the market. Writers and artists on comics like Misty, Scream and 2000AD deliberately tried to get away with as much as they could when it comes to disturbing stories and illustrating them. Children’s television drew from the visual language of Hammer and its rivals. Even the public information films wanted to scare us. Merchandise like the infamous Aurora horror model kits, including one of a screaming girl known only as The Victim! Whilst at school we were playing Top Trumps, which included two marvellous Horror sets. Now Rik Hoskin, Tim Brown and Chatri Ahpornsiri have paid homage to these inspired games with their very own Horror Hot Trumps.

The original Horror and Horror 2 sets were distinguished by wonderfully lurid artwork printed in bright four-colour comic strip style. Blood spurted from victims as monsters attacked them. Everything rendered with dark dramatic inks, the artwork could be ugly, but that was part of its energy. They were recently reprinted by Winning Moves in new retro editions. Just in case you have not come across them, it’s a simple card game where players draw a card, compare stats and player with the highest value wins the round and the other’s cards. Eventually the winner owns all the cards, although in practice when a game dragged on and we got bored, a majority was accepted. Aircraft, football players, motorcycles were typical subjects. Now with these set we could compare the merits of the Madman (killing power 69) against The Living Skull (killing power 63) or The Sorcerer (killing power 72). But Top Trumps had a secret weapon of collectibility. Long before Pokemon and Magic the Gathering, its maker knew enjoyment came as much from flipping through a pack to read their info. For a generation of young fear fans raised on Saturday night TV double bills, and Dennis Gifford’s Pictorial History of Horror Movies, we loved the artwork, not least because we could often recognise the famous publicity stills which the artist had cribbed from. For a Doctor Who fan like myself there was the bonus of seeing a Sea Devil carrying a blood drenched axe, here renamed Venusian Death Cell, or a Daemon now employed as a Fire Demon.

Hot Trumps is labour of love by Rik Hoskin, multi-media writer and no stranger to this blog, and comic strip artists Tim Brown and Chatri Ahpornsiri. I received a promo pack of Horror this weekend and I love them. Designed to played in their own right or mixed in with the Top Trumps originals, they perfectly capture the gleeful, gory style and humour of the Seventies cards. Amongst my favourites in this set are Martian Machine (horror power 90), Raw Rex (Fright Factor 80) and Dracula’s Daughter (Physical Strength 69).

If you would like a set of your own, the team will be unleashing a Kickstarter very soon. You can find out more by visiting their new website http://hottrumps.com/ and joining the mailing list.

Rik’s having a busy month, not least because he’s still been on the publicity trail for his new novel Bystander 27. He’s written articles for The Nerd Daily and File 770. He’s been interviewed by Roni Gosch for the Litcast of Doom podcast about his marvellous tribute to the Silver Age of comics.

Perhaps most impressively he’s now on YouTube, in conversation with Pierce Brown, author of the New York Times bestselling Red Rising SF series. Talking about Rik’s Bystander 27, and their collaboration on the Red Rising: Sons of Ares comic book series, as well as taking questions from the audience. Enjoy. It was organised by publishers Angry Robot. And read Bystander 27 if you haven’t already.