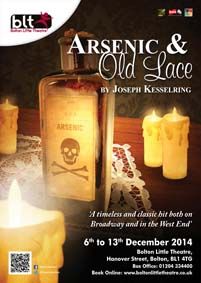 I’m shamelessly plugging my upcoming appearance in “Arsenic and Old Lace”, the classic American black comedy by Joseph Kesselring. I’m playing Dr Herman Einstein, the plastic surgeon and cringing henchman of the fiendish Jonathan Brewster. Armed with a comic German accent, I’ve been part of a hard working cast of actors and technicians at Bolton Little Theater and the rehearsals have been busy but rewarding.

The play is on for seven nights between 6th to 13th of December, tickets are £10 and if you are interested in watching then find out more from: http://boltonlittletheatre.co.uk/whats/arsenic-and-old-lace/

Written in 1939, this brilliantly constructed comedy, has impressively stood the test of time. As a writer I love the script, not just for its tightly designed plot and atmosphere of matter of fact madness, but for some jokes about writers which are still bang on target. Take Office O’Hara, the would-be playwright for whom his policeman job is “just a temporary thing”. “How long have you been a policeman?”, asks Mortimer, “Twelve years”, replies O’Hara blithely. Later on, after boring the room senseless with his hours long pitch, the cop protests, “I know the first two acts are a bit long, but I can’t see what we can leave out!”

It’s a play that combines slapstick of hiding dead bodies with some sharp satire on the hypocrisies of the monied establishment. The Brewster sister are hailed for the good works, but they are shown to be rather prejudiced as well as murderers. Their money and position means that the police treat them with rather too much respect. Although we are a British theater troupe, we are playing with American accents, because somehow the comedy just doesn’t work without them. This play is both timeless, yet fixed to a specific place and time.

Expect some production photos in a little while.

The Nucleus of the Universe for all Nerd Hacks!