Live from Worktown 2015 has begun, with three well received social events, including the launch of the Anthology, an evening with Flapjack Press and a debate on which famous poet to throw out of a balloon. I’m gearing up to film several of the coming events and put edited versions online. Expect a compilation post once they are up. But I just wanted to take the time to recommend two of our flagship events.

As well as running an afternoon workshop which is nearly sold out. John Hegley is presenting his marvellous combination of poetry, comedy and music on 18th May at the impressive theater space of Bolton College.
A favourite on the radio and music festival scene he first came to prominence on John Peel’s radio show. Hegley’s poem ‘Malcolm’ is one of the nation’s most popular comic poems. Mandolin-playing Hegley delights in audience participation. 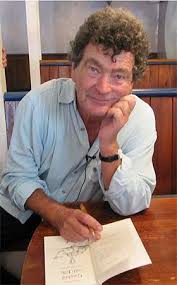 Brian Patten came to prominence, along with Roger McGough and Adrian Henri, in the 1967 best- selling Mersey Sound poetry anthology. Since then he has performed at the world’s leading literary festivals and has published several very award winning collections. He also writes for children and is a highly engaging performer. On 21st May he will be sharing the performance space of Bolton Central Library with another award winning poet – Mandy Coe.