I’ve mentioned this New York Times bestseller before and it is great to see Rik’s talent being recognised by fans of fantasy from around the world.

White Sand is based on Sanderson’s first ever completed novel, although he never submitted to publishers because he knew it need polishing. In later years the author had always had an ambition to go back and revise the book to improve it, and fit it into his later Cosmere saga. Eventually Dynamite Comics came to him, asking if he had any titles which he would like to be adapted into a comic. Sanderson saw this as an ideal opportunity to revisit White Sand and develop it into a graphic novel trilogy, which is now the canonical version of the story.

On the planet Taldain, the legendary Sand Masters harness magical powers to manipulate sand in spectacular ways. But when they are slaughtered in a sinister conspiracy, the weakest of their number, Kenton, believes himself to be the only survivor. With enemies closing in on all sides, Kenton forges an unlikely partnership with a mysterious Darksider, with secrets of her own.

Available from all good bookshops! Rik and I produced a fantasy audio series called Agents of Psyence which you can listen to and download from this very blog.

For a complete list of this year’s winners, please look at their blog here

In a distant future, man has colonised the solar system, but this brave new era of exploration has led in turn to a tyrannical caste system of genetically modified humans, ruled by the Golds. Down in mines of Mars, a young Red called Darrow decides to fight back. So begins Pierce Brown’s bestselling series of YA SF novels. However I must admit though I had not heard of them until my friend Rik Hoskin told me about his current comic project – Red Rising – Sons of Ares. 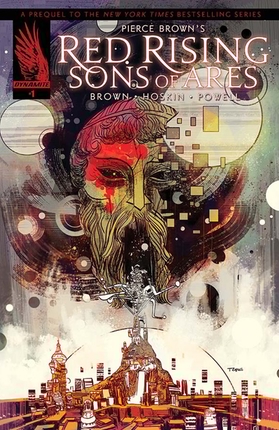 Published by Dynamite Comics, Sons of Ares is a prequel series, exploring the early life of Fitchner au Barca, the leader of the resistance movement calling themselves the Sons of Ares. The first two issues are out now and it has been well received by fans of the series. Rik is working closely in collaboration with author Pierce Brown, just as he did with Brett Sanderson on last year’s graphic novel White Sands. The splendid artwork meanwhile is by Eli Powell.

You can see a few preview pages and find out more details on this page. The series is available in comic shops and also on the Kindle.

More recently Rik has been interviewed by Dynamite about his latest series, and looking forward to issue four.  Its a great read too. You can find it here. I’m hoping to post some impressions of it soon.

Talking about my old mate Rik also prompts me to talk about the latest addition to this blog. If you look to the left of the screen, you will notice I’ve added a new permanent section, containing downloadable copies of our original audio series – Agents of Psyence. These MP3 files used to be available at Westlake Films’ site, until I took them down during that site’s revamp. Now I’ve brought them in-house so to speak. At the moment the page is fairly bare-bones but I intend to expand it in time.

Agents of Psyence is an action adventure series based on Rik’s early self-published comic Psyence Fiction. Set in present day Britain, an enigmatic billionaire called Sebastian Hayward has assembled a team of unusual specialists, including a cybernetic warrior, an ex-MI6 agent and an occult expert, to investigate supernatural crimes. It’s mixture of horror and SF, with an emphasis on pace and thrills. My own approach was definitely influenced by the work of radio director/producer extraordinaire Dirk Maggs (Hitch-Hiker’s Guide to the Galaxy, Radio 1 version of Batman: Knightfall amongst many others)

The first story Truth and Bone was adapted by Rik from the pages of the first two issues, and the second, Bloodlines, written exclusively for audio by Rik and myself. I think they’ve got some of my best production work in them and its always been an intention of mine to continue the series. Several other scripts were written by ourselves, John Isles and Peter Grehen. I released the series under the label Phantom Frame, which is where the title of this very blog comes from.

You can experience both stories for free, playing them on this site or downloading them. Hope you enjoy them, whether you’re a new listener or a returning fan.

Discover the Agents of Psyence by clicking this link