This has been an exhausting month or so. Although the plays Samuel Crompton – A Fine Spinner and Wyrd Sisters are many months apart on the calendar, they have been overlapping to hectic effect. I’ve been directing the former with a small group of talented actors, whilst at the same time auditioning the large cast for the latter. Not to mention there being a family crisis that necessitated spending a lot much more time than I like in the local hospital. Although I am happy to report that things are looking optimistic on that score at the moment.

Samuel Crompton – A Fine Spinner is a biographical play about one of the key inventors of the British Industrial Revolution. He devised the “Spinning Mule”, a machine which mechanised the cotton industy, taking the process from weavers’ cottages to large factories producing vast amounts of cloth for the empire. Although as Donna Hughes’ play reveals, Crompton himself so little of that wealth. It has been the first bit of directing I have done in quite a few years, the first stage directing I’ve done in over a decade. So it’s been a re-learning experience. Not just helping the actor’s performances and blocking the moves, but the matter of organising rehearsal dates and rooms, thinking about props, creating the sounds and visual material, costumes, dealing with the commissioners of production Bolton Library and Museums, and the practical questions of staging a production in a old preserved building with limited facilities. The play is being staged at Hall’ith’wood, Bolton, Crompton’s former home and now a visitor attraction.

We are an element of Invention Stories – a family event with craft activities, storytelling and two performances of our play, taking place on Tuesday 26 July. The play and the day itself are admission free, although the audience for each performance is limited to 30 because of the size of the venue. If you would like to book a seat, please follow one of these links:
11.30am performance or the 1.30pm performance

Invention Stories is one of many events celebrating science and engineering as part of Manchester being the European City of Science in 2016. You can find out more at their home page. 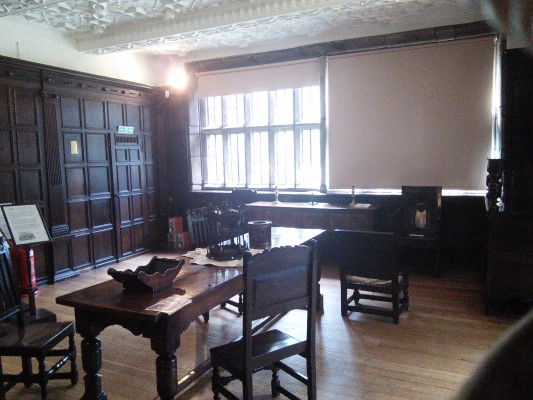 Despite the challenges I am glad we have been able to stage the play in the atmospheric room you can see above. For a while it looked as though building work would move us into the Central Library. I’ve been very lucky to have a talented and supportive small cast of volunteer actors (pictured above) who have taken on what is a quite wordy play full of narration with great aplomb. Their characterisation has been spot on almost from the word go, which has made my job a lot easier. I know them all from Bolton Little Theatre. I was quite nervous about approaching people to take part, so I’ve been grateful for the advice of Sandra Leatherbarrow (far left) and Nathalie Haley for their help with the casting. I’ve deliberately kept the staging modest, three chairs,  a table, a spinning wheel. On the day I’ll be running the technical side of the play, cuing the sounds and music, and the slideshow too. I’m definitely going to be relieved when I have this under my belt.

This educational play is definitely good practise for the far bigger challenge of Wyrd Sisters. Adapted from Sir Terry Pratchett’s novel of the same name, it brings his magnificent fantasy creation Discworld to the stage. Creating a fantasy kingdom, even a little one like Lancre, home of the Witches on a stage in a small theatre is definitely a challenge, particularly a script which has so many locations as this one. I’ve been very fortunate that veteran director and stage designer Joylon Coombs has agreed to take on the production design. He has come up with a marvellously flexible set that combines a heath with a stone paved area. Combined with lighting and gobo stencils projected on to it, I am confident that we can create a great fantasy atmosphere that is going to enjoyable in itself. Although the main focus is on the actors and Stephen Briggs’ ingenious adaptation. I am going to be using the model of the set to block out roughly what the moves will be and I hope to share some of that with you in a future post. Incidentally Joylon directed me in a production of Richard Sheriden’s The Rivals earlier this year, which also featured a clever set, recreating Restoration Bath. I played the foolish Bob Acres.

But before I could start properly thinking about blocking, I had to cast my play. In the past I have generally worked with a group of people I’ve known for a while. This time however I had to audition a host of actors, many of whom were strangers to me. At least I had a good number to start with. I had advertised the readthrough online but on the night I was nervous that almost no one would turn up. To my gratitude however there was a very healthy turnout. In fact several Bolton Little Theatre friends approached me later in the week, saying they were surprised when they heard how many there were. This I put down squarely to pulling power of Terry Pratchett’s name. It was nerve-wracking running it, trying to make sure everyone got a fair amount of reading time, trying not to have favourites, listening carefully. It was interesting to see which lines got laughs too, The sequence with the Players pretending to be Witches was hilarious. I was not too worried if people got the characterisation a bit off, since this was the first readthrough.

I felt it would be unfair to cast solely from the readthrough, although in the end I did cast one or two parts from that evening. I went on to have two more auditions, one for the female roles and another for the male characters who will be doubled up,  each actor playing three roles. Finally there were one or two roles where I did call on my previous experience and offered them to talented folk I’ve worked with before who know will do them justice. I was lucky in some ways to be casting a play with so many roles, so I had plenty of opportunities to recognise the actors who had been kind enough to show an interest. However I still had to make judgements and disappoint a few people who for one reason or another did not fit what I had in mind. That was definitely the hardest part, but I strongly believe in getting in touch with everyone as soon as I could regardless.

So although January and the rehearsals seem a while away yet, already I’m thinking about props and putting together the soundtrack. I’ll share more about my process soon on the blog.

Finally, in other news I have just put together a preview trailer for the whole new season at Bolton Little Theatre. Hope you like it: