It is always exciting and flattering when a theatre group chooses to perform one of my pantomimes. This year the two which I co-wrote with Adrian Barradell definitely seem to have struck a chord with societies. So I can only salute the following brave casts and crews who are performing Aladdin and Treasure Island in the first half of next year. Hope you all have a fantastic time.

Ambitions in Gloucester are putting on a performance of Aladdin in January.

The Wraysbury Players are staging Aladdin in Wraysbury, near Staines, also in January. 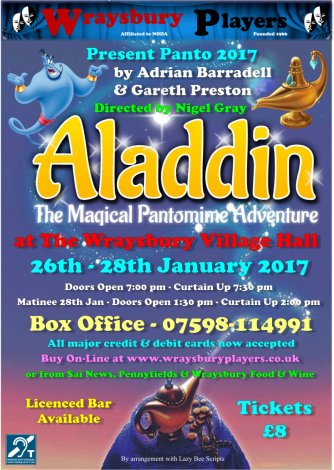 Tregony Clockhouse Players are putting on Aladdin in Truro in February and finally
Brockweir Amateur Dramatics Society are visitng Treasure Island themselves in March.